Massive analysis of thousands of Amazon tree species: most are restricted to the wettest locations and are vulnerable to droughts.

Massive analysis of thousands of Amazon tree species: most are restricted to the wettest locations and are vulnerable to droughts. 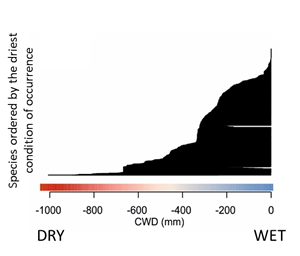 A study in Ecography used information of the distribution and abundance of 2570 Amazon tree species across RAINFOR and ATDN plots to calculate the most favourable climate condition for each of them. Led by Adriane Esquivel Muelbert, a Brazilian PhD student at Leeds University, the team of 82 scientists discovered that most species are clearly restricted to wet locations, whilst the fewer species that can tolerate dry conditions are widespread.

This pattern in the distribution of the species suggests that most Amazonian trees may be unable to tolerate the anticipated increase in dry season intensity in the region.  The work will provide a unique baseline for examining the impact of climatic changes on Amazon forests.  For conservationists it also means that the very wettest forests in the Amazon and Andes may be even more vital than we thought – not only are they centres of diversity now, but they may be the only places many species will be able to survive in the future as climate change increasingly impacts the world’s largest tropical forest.

This research is a combined effort by researchers from across South and Central America who contribute to the RAINFOR and ATDN Amazon plot networks.  Adriane’s work is supported by a European Research Council Advanced Research Grant to Oliver Phillips.